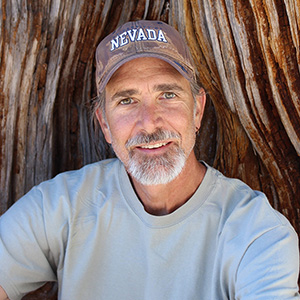 Mike Branch is a writer, humorist, environmentalist, father, and desert rat who lives with his wife and two young daughters in the western Great Basin Desert. His work includes nine published books, one of which is the Pulitzer Prize-nominated John Muir’s Last Journey: South to the Amazon and East to Africa (Island Press). His four recent books are: Raising Wild: Dispatches from a Home in the Wilderness (Shambhala / Roost Books, 2016), Rants from the Hill: On Packrats, Bobcats, Wildfires, Curmudgeons, a Drunken Mary Kay Lady, and Other Encounters with the Wild in the High Desert (Shambhala / Roost Books, 2017), ‘The Best Read Naturalist’: Nature Writings of Ralph Waldo Emerson (co-edited with Clinton Mohs, University of Virginia Press, 2017), and How to Cuss in Western (Shambhala / Roost Books, 2018).

Mike has published more than 200 essays, articles, and reviews, and has given more than 300 invited lectures, readings, and workshops. His creative non-fiction includes pieces that have received Honorable Mention for the Pushcart Prize and been recognized as Notable Essays in The Best American Essays (three times), The Best Creative Nonfiction, The Best American Science and Nature Writing, and The Best American Non-Required Reading (a humor anthology). His essays have appeared in venues including Utne Reader, Orion, Outside, Ecotone, CNN, Slate, Bustle, Terrain.org, Pacific Standard, National Parks, Hawk and Handsaw, Places, Red Rock Review, and Whole Terrain, and have been anthologized in numerous collections on family, environment, and humor.

Mike, who is Professor of Literature and Environment and University Foundation Professor at the University of Nevada, Reno, is co-founder and past president of the Association for the Study of Literature and Environment (ASLE), served for sixteen years as the Book Review Editor of ISLE: Interdisciplinary Studies in Literature and Environment, and is a co-founder and series co-editor of the University of Virginia Press book series Under the Sign of Nature: Explorations in Ecocriticism. He is the recipient of the Ellen Meloy Desert Writers Award, the Nevada Writers Hall of Fame Silver Pen Award, the Western Literature Association Frederick Manfred Award for Creative Writing, and the Willa Pilla Award for Humor Writing. His current book, under contract with Pegasus Books, is on the jackalope.

When he isn’t writing, Mike enjoys activist and stewardship work, native plant gardening, bucking stovewood, playing blues harmonica, sipping sour mash, cursing at baseball on the radio, and walking at least 1,000 miles each year in the hills and canyons surrounding his desert home.

A complete listing of essays may be found at www.michaelbranch.com.