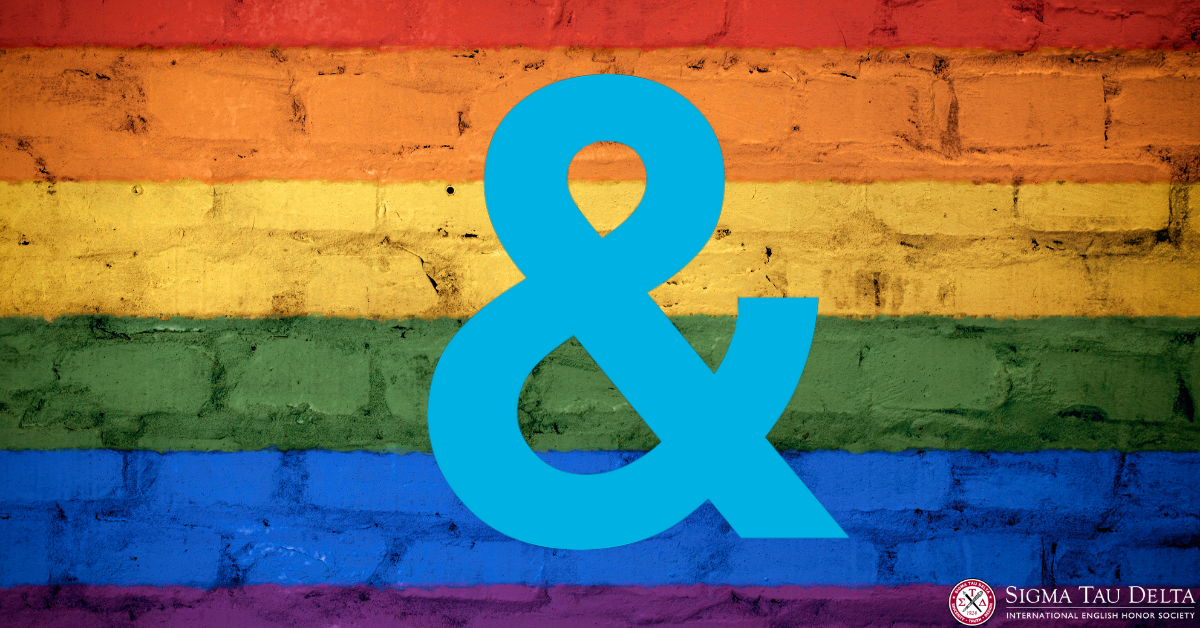 Sigma Tau Deltans Kevin Stemmler and Larry Dennis—both longtime active Chapter Advisors, former members of the Sigma Tau Delta Board of Directors, and Delta Award Recipients—have created an annual LGBT convention award, which will be initially given at the Sigma Tau Delta 2022 International Convention, the Society’s first in-person event since spring 2019. The award specifically honors the best convention work representing or celebrating the LGBT community. In addition to providing representation, the award is compensation for the many years that LGBT voices have been overlooked, in general and in academic settings. After our many years of service and dedication to Sigma Tau Delta, we felt it was our personal duty to step up and acknowledge LGBT scholarship and creative work.

The name of the award reflects changes in language and scholarship and requires a brief explanation. If you are aware of GLAAD‘s “&Together” campaign, you already understand that this simple symbol of the blue ampersand intends to unite all voices and identities. In 2019 The Gay & Lesbian Review published “The Ampersand Issue,” which explained its reason for rebranding itself as G&LR. The editors offered an explanation that mirrors our own life experiences for not including the widely accepted “Q.” Historically and linguistically, the word “queer” was offensive—and to many it remains so. And as we grow old and wear our trousers rolled, we cannot adjust to claiming the word for our own usage and in our own vocabulary. Thus, we decided the ampersand demonstrated inclusivity, and was more appropriate to an English Honor Society award. Regardless of what letters or symbols any individual may choose for their identification, we are launching this award to celebrate the variety of voices that have too often been ignored. We look forward to honoring the first recipients of the Stemmler/Dennis LGBT& Award at the 2022 Convention!

Given for the best presentations by active student members at the Sigma Tau Delta International Convention, these awards were established in 1991 by Isabel Sparks, the fifth President of Sigma Tau Delta.

Each year, these awards recognize critical essays and creative works by active students and alumni writing on the convention theme—this year’s theme is Action. The monetary prizes are given in honor of Justin Q. Owen, the first National Secretary of Sigma Tau Delta.

This award will be given yearly to honor excellence in convention presentations for “Critical Work on Poetry or a Poet.” Beth DeMeo was an active member of the Sigma Tau Delta organization, having served as a chapter sponsor, Eastern Regent, and President of Sigma Tau Delta.

Sigma Tau Delta values creative and scholarly contributions that represent a diversity of abilities, races, and creeds, and we present special awards for the best among these submissions. Sigma Kappa Delta (our sister organization at two-year schools) and Alumni Epsilon (the alumni chapter of Sigma Tau Delta) also reward excellent submissions by their members.

Submit to the 2022 Convention

To submit a paper to the Sigma Tau Delta 2022 International Convention in Atlanta, GA, and be considered for a Convention Award, visit the Submission Overview page to start the submissions process. All paper and roundtable submissions are due by Monday, November 1, 5:00 p.m. Central Daylight Time (CDT).